Overall, pretty good, especially considering the context of the moment. Let's run down some of what we know.

We are now, increasingly, a "top tech hub"

We even outrank the Bay Area now! As CultureMap explains:

Based on job-posting data from August 2019 to July 2020, the CompTIA trade group looked at 20 metro areas with populations over 250,000 and where demand for tech workers is greatest. CompTIA then ranked the metros on cost of living, number of postings for IT jobs, and projected IT job growth over the next year as well as the next five years. DFW jumped from No. 7 last year to No. 2 this year. CompTIA attributes DFW’s leap to the sheer number of IT jobs available (178,579 job postings last year), with projections of more to come (3 percent growth from 2020 to 2021 and 11 percent in the next five years).

Plus: The median salary for IT professionals in DFW is $94,044. CompTIA says the cost of living in DFW sits 2 percent below the national average.

What about all the job losses because of COVID?

The picture isn't perfect or even great, but we are doing better here:

New data from the U.S. Bureau of Labor Statistics shows that Dallas-Fort Worth picked up nearly 62,000 jobs in October, the most recent month available, to cut its year-over-year losses to fewer than 100,000 for the first time since the pandemic began.

Here's the visual of how we compare to other major metro areas: 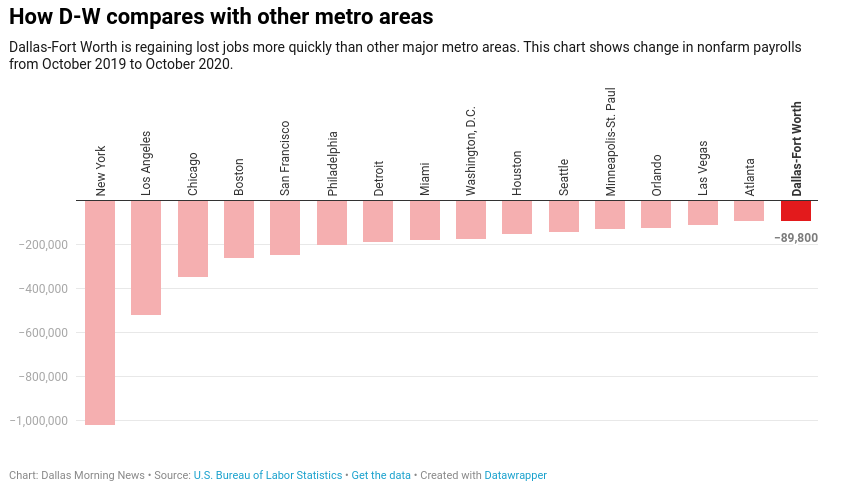 What about the relocations?

We have covered off on DFW relocations a few times on this blog,  and recently BisNow did a similar article on the pros and cons of the relocation boom, noting:

"A lot of companies want to get back to work and the regulations and shutdowns have made it impossible to do that in those other jurisdictions in California and New York," Transwestern Senior Vice President Billy Gannon told Bisnow. "I have met a lot of people in the past six to nine months who have moved to Dallas, and the straw that broke that camel's back was the schools not being open."

Indeed. Relocations mean those companies need local talent, which can increase the job pool. But ... there's a flip side: A report from Bill Fulton of the Rice Kinder Institute for Urban Research noted the general rule is that the ratio between home prices and income should hover around 3:1. But that ratio in DFW rose from 2.9:1 in 2009 to 3.67:1 in 2018.

The median price of a DFW-area home was $146,697 in October 2010. That has more than doubled in 10 years and reached $303,500 in October 2020, according to data from the Texas A&M University Real Estate Center. While the DFW prices are much steeper today, they still remain affordable when compared to California's October statewide median home price of $711,300, which is up 17.5% from the previous October, according to data from the California Association of Realtors.

So who all is hiring, then?

A bunch of people, including:

What 10 North Texas areas are among the best places to live in the state? (A surprise No. 1, perhaps.)

The Emerson at Frisco Market Center